This post comes from years of heartache and experience.  I beg you, please pick your moving partners carefully!

This is potentially the most important you choice you will make just shy of where you are actual moving to.  These so called “friends” can make your day 100 times easier, or they can make it supremely crappy.  Maybe even for multiple reasons.

Remeber, these people are going to be with you ALL day, choose people whom you like and can tolerate being around.  If their sense of humor offends you…. You won’t last long.  Moving is already a stressful task to undertake and these factors can build until you explode and before you know it you have ruined a friendship.  Not a great one, but he was the guy who was single still and had the really nice TV…. so you just lost the rest of the enjoyment out of football season until you apologize….   Or maybe they have an odor that offends you.  Ever been in a moving trailer on a hot day with someone who hasn’t showered….. just let that thought marinate for a moment…..  Choose wisely!

Be sure the person on the other end of your couch understands physics when approaching doorways!  This can be the most frustrating thing in the universe, and potentially end in fist fights if you are not careful who you trust to be strong and who you trust to communicate well with you when fitting big things through little holes….

This is the bread and butter of all moves, how much can you get in the trailer so you don’t have to make multiple trips.  Obviously the more efficiently you can pack it the faster your move goes, and contrary to popular opinion the safer your things are while in transit.  Density works as protection for your stuff. 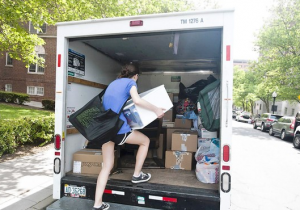 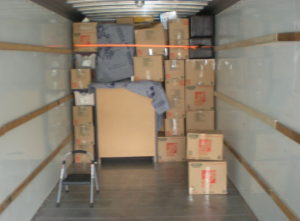 Here’s a good rule of thumb, if you can see the front of the trailer from the back of trailer, you just wasted money.  You are renting the space of the trailer so you either wasted money or you wasted time, which according to the adage is money, so yeah…..

Rule number 1:  Heavier stuff towards the front, the way that the trailer is structured in conjunction with the truck is such that the trailer will tow better with more weight in the front than in the back.  So have a game plan of the items that are going in and have an order of the heaviest items laid out in your mind, beginning with the heaviest toward the front.

Rule number 2:  Make the first wave of loading go all the way to deck.  Like the picture above on the right that shows this done correctly you must take the first section all the way to the deck to create a wall for you to stack against the rest of the way.  You will never be able to stack a row higher than the one in front of it.  It must only descend toward the back of the trailer.  So the goal is to keep it as high as you can for as long as you can so as to not waste any space.

Rule number 3: Not all boxes are meant to stack.  If the goal is to build the wall as high as you can at the front of the trailer and keep adding on to that, you must partially rely on your arsenal of boxes and tubs to do so.  As furniture tends to be clunky and oddly shaped your tubs and boxes are going to be the most consistently shaped and stackable.  However, once you get 7 or 8 boxes high that bottom box has a tendency to start getting smushed.  This usually gets worse as you begin to drive.  You must pay attention to the weight of each box as well as the integrity of the top of the box.  If its a new box it will respond to stacking on top of it much better than if it was say an older box.  So pay attention to the sturdiness and obviously begin with the heaviest box on the bottom.

Rule number ONE: Bring a hand truck, also called a two wheeler or some sort of dolly.  This is particularly helpful for the less strong people of the group because it allows them to move more at a time and maximize their trips while you take care of the bigger stuff.  Boxes always stack well upon each other up to a certain height, so as boxes make up the majority of what is usually getting moved, a two wheeler suddenly turns the weakling of the group into the most productive person allowing him to move 4 or 5 boxes at a time.   Depending on the kind of dolly some transform into 4 wheel carts.  This can be very handy for odd shaped things that are hard to pick up sometimes, like chairs or side tables. 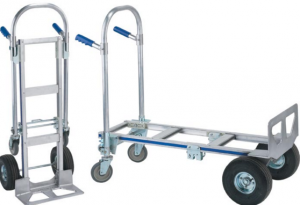 Hi there, Im Joseph, thanks for stumbling on to my blog.  As long as i can remember I have been lifting things 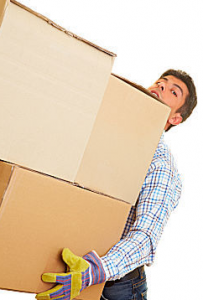 Thats the problem when you’re a dude, you work out, and you own a truck.  The result is that all friends and family everywhere will ask you to help them move.  So begrudgingly I feel obligated to help out because it’s more painful for me to see people struggle and do it incorrectly.  No honestly.  Which leads me to why we are here.  I have grown up moving and lifting, and I am not sure why, maybe its because my dad was really good at it and we made a great team, but I learned how to move things correctly.  How to lift properly, how to turn the corners, how to maximize my trips, and even more importantly, I know how to load the truck.  This is partially from being employed by a logistics company for a short stent, and like I said, I have moved everyone I know, more than once, so I am pretty much an expert at this point.   So we will be spending some time here simply discussing some of the best techniques to moving and packing and loading that I can offer.  My hope is to help you understand some things and make it easier on you next time you find yourself under a box.